My trip to New York! 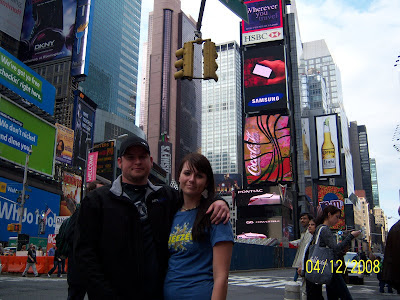 (I look really hefty in this picture....why do I feel the need to stick my stomach out as far as I can in pictures?)

Unfortunately, I am back from New York but I had a lot of fun! The first night I was there we were both pretty tired so we just watched a movie with his roommates. The next morning (morning meaning 12:30 or 1) Mike, his friends Blake, Gary and Jorgen and I, went to the train station that took us to New York City. It only took us about and hour and a half which was less time it would've taken us to drive since he lives on Long Island. Plus we didn't have to deal with all of that traffic. 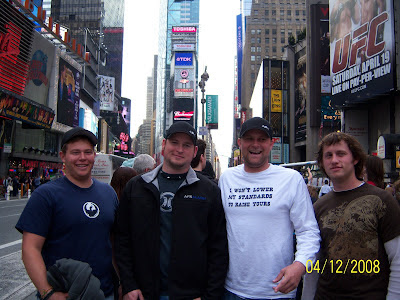 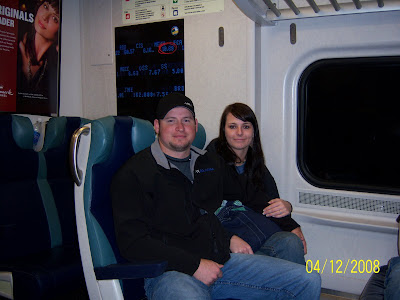 This picture is of Mike and I in the train. He is hot. 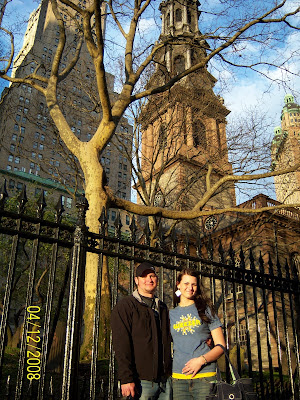 This picture is in front of the church that was really close to the twin towers but didn't get damaged at all... weird!

We went to Amityville, Long Island (Mike lives in Long Island by the way) to go see the Amityville house from the movie Amityville Horror. I got some really cute bags from a chinaman and I love them. Also we saw time square and ground zero, we went to New Jersey to have dinner with a family in the ward he was in when he lived in California, went through the holland tunnel (The tunnel that goes under the Hudson River), we saw the statue of liberty and the empire state building. We got a lot done in the few days we were there. 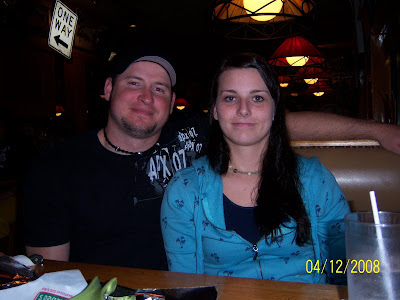 (Us at Applebees, please excuse the fact that I look a lot like a man in this picture... I wonder if people thought Mike was with a guy and that he liked guys...)

We also ate at Ruby Tuesday's, Applebees, and the Royal Oak Diner which was pretty good but not as good as we hoped. Anyway, I went to the airport on Monday night and said goodbye to Mike. It was so sad because I wont see him for a couple of months. I know it is probably pathetic but it is true! I miss him a lot! Enjoy all of the pictures! Oh and P.S. Jessica, Eliza and I are going to New York May 31st- June 3rd! Jealous?

Posted by The Findarle Family at 4:41 PM

Thanks for updating so quickly. You are hot. I am very excited about our sisters trip!

And the girl in the poster behind you in the train looks like you.

Great Pictures. I didnt know your dad joined you on the trip tho!!

Yes I am jealous. I'm very excited for your sisters trip. That will be soo fun!! You are attractive.

Why do you have to put yourself down in every picture? Wish I was going to NY with you. Too bad I'm going to have to save my money for England, Ireland and Scotland. Jealous?

WoW! I am so jealous! What would it take to become your "temporary" sister so I could join you on your trip? Also please listen to your mother and stop putting yourself down. You are a wonderful, beautiful, attractive, fun, hot,sweet spirit!

You sisters are lucky ducks to get to take a trip like that.
Yes, I have to admit I'm jealous.

I didn't realize that I hadn't commented yet- sorry. Mom's right- stop denying your hotness. Ask Mike- I'm right. Also, remember when we are going to NYC together in 6 weeks? That is rad. Then you get to get married right after that.

I know that since I am your brother I should know everything that is going on in your life, but what the heck!? What is the purpose of you three going to NY? It would be so much cheaper and fulfilling if you just come up to SLC to visit me. Cheers!